Blessed Be The Fruit 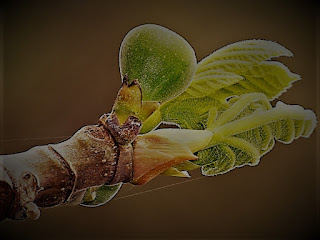 Albert pulls the hood over his head, enjoying its smooth embrace as he fastens it in place. He shuts his eyes to focus on what lies ahead, preparing for his part in the solemn ritual. It’s nearly time, he tells himself, not long now. Unable to contain his curiosity, he crosses the small chamber and pushes the door open a crack. Just enough to see what is happening on the other side. What’s waiting for him.

There they are, hundreds of them. Streaming in silently, filling the pews beneath the soaring sandstone arches.

Where once sweet castrati voices had been offered up to the heavens, the only sound is shuffling of feet against the polished marble floor, a low murmur and the occasional cough. All eyes are turned to the High Altar. Desperation hangs in the air like a miasma. Though they are many, the crowd stands like a single creature, wounded, watching, hope oozing from its pores. Waiting.

Sulphur-tinged daylight lends a sepia hue to the jewel-bright colours of the stained glass windows that workers laboured over centuries ago, for the glory of God. But the religion the cathedral was built to serve is now long dead, its saints and martyrs no longer revered. Its nooks and nave now heave with living bodies pressed against statues of forgotten knights, bishops and patrons.

No Eucharist is performed at the altar where priests once shared the body and blood of Christ to congregations hungry for redemption. Instead, a large glass dome stands before it, hermetically sealed against the acrid air. Inside stand two trees, each as tall as three men, with broad, glossy leaves spread like splayed green hands over their branches. They echo the idyllic image in the first of the tryptic of windows that rise up behind the chancel. A vision of the beginning of the world, unspoiled, unsullied, innocent, populated by one man and one woman. Adam and Eve, unashamed and naked but for some strategically placed foliage, in the Garden of Eden.

And the Lord God commanded the man, “You are free to eat from any tree in the garden; but you must not eat from the tree of the knowledge of good and evil, for when you eat from it you will certainly die.”
– Genesis 2: 16-17

The trees in the dome are fig trees – one male, one female. Their fruit a symbol of fertility, like a ripe womb, considered by some the original source of temptation in God’s first garden. That temptation is seen in the second window, a snake twisted around the trunk as it whispers enticements into Eve’s ear.

“You will not certainly die,” the serpent said to the woman. “For God knows that when you eat from it your eyes will be opened, and you will be like God, knowing good and evil.”
– Genesis 3: 4-5

These are the only living trees left anywhere on the planet. Beyond the dome, every leaf, flower and blade of grass has withered or been burned and stripped away. The sky is tinged with an ominous ochre, the land a uniform sea of grey-beige cement. The oceans are reduced to a listlessly heaving mass of flotsam that will never rot nor sink. No squawk of birds or buzz of insects joins the hum of human occupation – they haven’t for more than a generation.

And yet, congregations still gather at the cathedrals to worship and pray.

The crowd looks to its left at the sound of a small door at the side of the nave opening. They follow Albert’s slight, bent figure as he steps out and pads his cushion-soled way to the altar. He’s the chief attendant, dressed not in the priestly robes or vestments of past centuries but a hooded bio-suit and perspex face mask. Moving with the reverence of the most pious supplicant, he takes a card from the bag slung around his body, places it into the slot at the opening to the dome, unlocks the outer door and enters. Closing it behind him, he turns and steps through the second door into the trees’ realm.

Albert is a horticulturist, the last of an almost-dead breed. At nearly 160, medical science has ensured that his mind is still clear and multiple laser surgeries have kept his vision sharp. His movements are painful despite his many implants, yet driven by the urgency of his mission. Named after the patron saint of scientists, Albert is a mere mortal, decades beyond his prime and wracked with doubt and desperation. The load he carries is a heavy one. The hopes of the world lie on his shoulders. Hopes for a green resurrection. Rebirth.

It’s time to begin the ritual. He plucks two small buds from the male tree, cuts them open and taps out their pollen into a sterilized steel bowl before gathering the precious dust into a syringe. Then he takes a needle and passes it all the way through the single fruit hanging from the female tree. Into the hole it leaves, he injects the pollen and, lifting his mask a little, gently blows into the hole like a kiss on the wind - just to be sure.

In the third window above him, the faces of the man and woman are twisted with fear and anguish. No longer naked, they’re covered with rough tunics as they flee an angry angel charged with their punishment.

And the Lord God said, “The man has now become like one of us, knowing good and evil. He must not be allowed to reach out his hand and take also from the tree of life and eat, and live forever.” So the Lord God banished him from the Garden of Eden to work the ground from which he had been taken.
– Genesis 3: 22-23

A deep sense of peace passes through Albert’s bones. His mission is complete, his purpose fulfilled. He is done. He turns and faces the crowd.

With shaking hands, he removes his mask completely. As he slips his hood down, the halogen light glints off his delicate pink scalp dotted with age spots and wispy white hair. The gloves go next, freeing him to unzip the bio-suit and step buck-naked out of it. His meatless buttocks sag loosely as he turns to face the trees. He raises his arms to them in tribute then brings his hands together in prayer. The crowd responds with a mass murmur rippling through the pews:

“Blessed Be The Fruit.”

Albert is spent. His time is over. These are his last moments, and he is claiming them. He sits creakily cross-legged at the foot of the mother tree and leans his head against her trunk. His eyes flutter and close as he breathes a long sigh of contentment. Beneath his lids dance visions of juicy red-fleshed figs plucked from the trees in the sunlit gardens of his youth more than a century and a half ago. He has regained his paradise. Only time will tell if he is alone.

The ritual is complete, but the congregation does not leave. Even after Albert’s chest rises and falls gently for the last time, they refuse to go. This is where they need to be. There is no fear on their faces, just weariness and resignation pricked with faith.

Reluctant to return to the harsh, leafless world beyond the cathedral walls, they sit and wait. For a miracle. For a resurrection. For the glory of what they once had, but have lost forever.