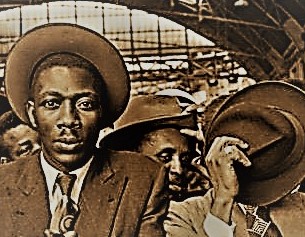 June 1948: As the gangway landed with a jolt on the Tilbury quayside, Gabriel smoothed down his suit and took a deep breath. Everything was grey. So different to Jamaica’s fierce sunshine and loud colours.

The people were grey too. Stevedores scuttling about like ants. Immigration officials lined up to check papers. Curious locals gathered to catch a glimpse of the new arrivals. All in shades of grey.

And there she was, shining like a beacon cutting through a sea fog. Platinum hair and a slash of red lipstick. Gramma would have called her a Jezebel. But she was no wanton hussy. She was classy, powerful, in control.

Like many onboard the Empire Windrush, Gabriel had no-one in Britain. He arrived alone, dreaming of a better life and the chance to play his music beyond the jive joints of home. He was 19, his suit was too big, and the furthest he’d travelled before was the bumpy bus ride to Kingston.

As he stepped out into the street, a hand touched his shoulder.

“Follow me,” she said, leading him to a café where someone called Madge served them stewed tea from an urn.

“My name’s Val,” said the blonde. “And you, my dear Gabriel, are special.”

He started at the sound of his name.

“You don’t know why yet, but it’ll become clear over the years. When the time comes, I’ll call you.”

June 2020:  She stood in the dingy jazz bar he’d haunted for 50 years. Ageless, resplendent in a leather jumpsuit, her hair still long and shockingly pale. The scarlet gash of her lipstick declared she was ready for action.

She looked him up and down. “A VERY long time.