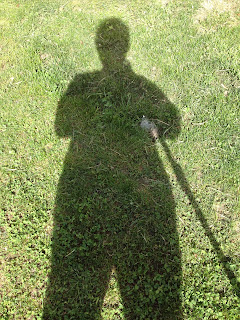 May is usually one of my favourite months of the year - but as its last few hours tick away on my oversized kitchen clock that thinks it belongs in a 1950s rural railway station, I must confess that I'll be quite happy to see the back of it.

I spent most of the month immobile, sprawled on the sofa, hobbling about on crutches and later limping around pathetically.

It's not my natural state.
Usually, despite the evidence of my bulky bod, I'm in a state of fairly constant motion - getting up frequently to attend to some forgotten chore, striding down the street with a camera in my hand or hands in my pockets, plodding doggedly away on the treadmill most days in a bid to to ensure I'm healthy (if not hot) before the dreaded Big M hits.

But that's just what landed me in the state I found myself in.

It was the first Monday of May, and I was halfway through my morning commute from one of Athens' northern suburbs down to the port of Piraeus after a restful long weekend.

The sun was shining, birds were singing, there was still a fresh spring chill in the air, and I was ready for the week ahead. After taking the Metro down to Monastiraki, I made my way up to the platform for the electric railway line down to Piraeus, to see the train doors closing. After a split-second inner debate, I decided not to throw myself at the doors at the last minute, but wait for the next train to come along.

But then, the doors opened again....

....and I decided I could make it after all.

There's a reason why most middle-aged women don't run for the train.

There's also a reason why they say "Mind the gap".

As I sprinted those last couple of metres to the train, my left foot failed to land on the platform, or the carriage floor, and landed firmly in the gap, sinking up to just below knee level as the forward motion continued taking the rest of me forward.

I can now attest to the fact that those stars and exclamation marks you see in cartoons do exist. They make their appearance along with an exclamation of pain that explodes somewhere in your body.

But it was probably my pride that was hurt the worst - especially after some kindly fellow-travelers helped haul me to my feet and I managed to take the few steps to the seat one had helpfully vacated for me.

"Well, that made me look like a prize idiot," I thought as I rubbed my shin and assured those around me that I'd be fine. "If I could walk on it, I can't have broken anything."

By the time I reached the office, I wasn't so sure.

An hour later, I couldn't even hobble to the toilet or bend my knee, and I was starting to worry that I had done some real damage. Cue a phone call to the long-suffering Ovver Arf begging him to come and get me.

Like a knight on a white charger (well, actually in a slightly grimy car) he arrived 90 minutes later, having battled Athens' Monday morning traffic, looking suitably concerned. He whisked me off to our local hospital, only to be told that A&E wasn't working that day and directing us to the hospital that was accepting patients. Another couple of hours passed in which I was steered round a maze of beige and green corridors in a wheelchair kindly offered by a porter to various admins, doctors and X-ray techs, then back to the first doctor for the verdict.

I was lucky - by some miracle (perhaps because my body can be as stubborn as my mind), no bones were broken. I had, however, suffered a nasty trauma to the knee and shin, and all I could do was rest it, ice it and medicate the pain.

On finding out I'm from the UK, my friendly doctor couldn't resist teasing me that I of all people, coming from the land that first said "Mind the gap", would fail to do just that. I smiled, I laughed, I looked suitably sheepish - and I said a little prayer of thanks under my breath that I wasn't going to be out of commission for six months. After all, I'd only just paid a year's subscription at my local gym.

So that was my May. A little different from the usual late spring riot of walks, al fesco coffees and maybe even a dip in the sea. And a lot more boring.

But June's just around the corner. The crutches have been gleefully cast aside. Though still slightly swollen and limping a little, I'm walking normally. And I'm even planning on getting back (gently) to the gym.

And at least my mangled limb will give me an excuse to hide my chunky legs under long dresses as we welcome the summer.

Labels: Me Myself I 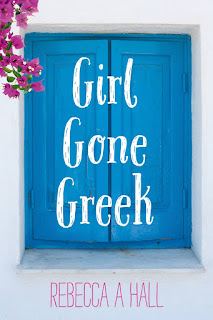 Ever wondered what awaits those real-life Shirley Valentines who leave a life of expected conventionality and comfort for the unknown of a foreign land with a different language, very different habits and a squiggly alphabet?

Rebecca A. Hall’s debut novel “Girl Gone Greek” will give you some of the answers – from the point of view of Rachel, a young English woman who escapes familial judgement and the accepted mores of her homeland to become the newest English teacher in a Greek village. With nothing more than a sprinkling of Greek words to get her by. And in the midst of the worst economic crisis the country has seen for decades.

What Rachel discovers after arriving in the grimy capital and taking the bus out to the Peloponnesian village confirms some of her expectations, but defies most. Peopled with colourful characters, almost incredible but somehow entirely believable for anyone who’s ever had any contact with ‘real’ Greek society, Rachel’s tale is one of love for the country she discovers tinged with frustrations and confusions of the culture clash that awaits her.

The story is written in an easy, familiar style that had me nodding in recognition and chuckling in sympathy throughout. It’s like being told the tale by a good friend over a week of afternoons featuring delicious, sweet baklava and strong treacly cups of Greek coffee.

It’s a voyage of discovery of the Greece beyond the glossy pages of the holiday brochures and the alarmist headlines to reveal the reality of ordinary life for its people – their hopes, their dreams, their struggles, their dichotomies and, most of all, their lust for life. But perhaps, more than anything, “Girl Gone Greek” is Rachel’s tale of self-discovery as her time outside England removes her from the comfort zone that always felt vaguely like a straitjacket.

It finishes as her first year in Greece comes to an end, but somehow, you know that she’ll be back – perhaps taking delight in introducing her hyper-judgemental sister to the delights and frustrations of Greek life. And, as I finished the final chapter, I found myself urging Rebecca to get working on the next chapter of Rachel’s adventure.