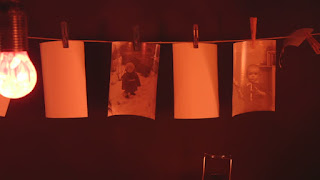 That’s where it started. In the darkroom. I’d spent the afternoon taking pictures of a sixteen-year-old with the wholesome teeth and unchallenged confidence of a future beauty queen.


Sarah. That was her name. You know the type. Clear-skinned, bright-eyed, conventional little blonde. Aced her exams, dating the captain of the cricket team, raised on a diet of praise as she swanned her way to adulthood. Almost certainly head prefect material. Pretty, polite, practically perfect for the niche carved out for her. And dull as ditchwater.


What could I do? Pampered little madams like her paid my rent. Picture perfect portraits of good girls that never betrayed the small cruelties they inflicted on the outcasts at school. Studio portraits for the yearbook, doting grandparents, distant aunts and uncles, whatever – that was my bread and butter. After the strikes and shortages of the “Winter of Discontent” the papers had been screaming about, I couldn’t afford to turn good business away, could I?


I’d posed her prettily in front of the backdrop and started shooting. Brushing a hair off her cheek, adjusting her collar, sweet talking her to get the most flattering shots. Snap. Snap, Snap. Now one for grandma, sweetheart. Snap. Snap. Think about David Cassidy. Snap.
Yawn.


Mother sat in the corner, smiling stiffly and watching me like a hawk. No need, of course. Even if I was that kind of sleaze ball, her little princess just wasn’t my type. I decided to butter her up. Massage her ego. Put her mind at rest


“Come on, Mum. Let’s get a nice one of you both together. I can see where she gets her looks from, though you look more like sisters to me.” Snap, snap. Dear god, save me from this tedium.


After the goodbyes and thank yous, I locked the front door and went to the darkroom. Small, cramped, reeking of chemicals, its womb-like familiarity welcomed me like family. The warm glow of the safety light pushed fingers into the corners, shining off the smooth plastic bottles lined up next to the developing trays.


A sudden movement in the corner. I peered into the dark. Nothing but shadow, lurking where the orange glow couldn’t reach. But it seemed to be breathing, in and out in a steady rhythm. My own breath. I held it. The movement stopped. Of course. I shook myself out of foolish imaginings. After all these years, should be used to the weird shapes that form in the dark as I pour and dip, swish and pull prints from their warm baths. Shadows dancing past the lines of smiling faces pegged up in the gloom, hung out like the weekly wash.


But, as I pinned the final print of Sarah and her mother, grinning like idiots in a washing powder advert, the darkness nudged my arm and reached out a dark finger to stroke the image. I felt nothing, heard nothing. But I knew. It wasn’t just the fumes.


I never did get paid for that studio session. Sarah and her mum never got home, thanks to a driver who’d had a few too many. The local rag used one of my shots with the screaming headline “Star pupil and mother killed in drink-drive horror”. No credit though. So much for the exposure the photo editor said I’d get. I mourned for them, in my way. How could I not? But if I’m honest, I mourned my lost fee more.


I used to do school photos. Spent the day in pale green painted classrooms, trying to organise kids who’d arrived scrubbed and combed to pose in awkward groups of siblings. Class shots too. Not anymore. Not since the shadow stroked my handiwork again. Two weeks before a freak avalanche wiped out most of Class 2B on a school ski trip.


Even then, I didn’t admit the connection. Couldn’t. Those horrible random accidents were just that – random. Nothing to do with the shadow in my darkroom.


But then there was the winner of the Bonny Baby contest who simply stopped breathing one night, in the safety of her cot, for no apparent reason. Every mother’s nightmare. Waking up after an uninterrupted night’s sleep, thankful for the rest, only to discover death staring from their child’s mattress.


And the local rugby star, stabbed in the guts when he got caught up in a pub brawl he had nothing to do with. Three weeks they had him on life support, hooked up to a beeping machine. His big toothy smile replaced by a lifeless drool. His beefy body getting weaker and more useless before someone poor sod had to make the awful decision to pull the plug.


The Victorians used to photograph their dead babies. Did you know that? The ones who could afford it, I mean. Waxy faced toddlers already stiff with rigor mortis posed for immortality, sometimes propped up by bereaved mothers with faces covered by tablecloths. I swear in all those pictures I can see the hand of a shadow man, caught in the folds of the cloth or creeping over the shoulder of the dead child. Like it’s afraid of losing what it already has.


Anyway, where was I? Oh yeah. Well, that’s why I stopped doing school photos. Weddings and christenings too. Semi-retired, I suppose. I make just enough to cover my rent and feed myself as the official photographer for the local council. You know the sort of thing. Mayor in his official chain opening some new factory. Shaking hands with visiting businessmen and the like. No sign of the shadow man there. I suppose local dignitaries aren’t his cup of tea. Not mine either, but it’s better than the alternative.


My boy came to see me the other day. Haven’t seen him for years. Not since his mother left all those years ago. Fair enough, she kept in touch, let me know how he’s doing, sent me a snapshot every time he blew out a new lot of birthday cake candles. But they’d moved a way off, up north, and there was never time, money or courage for a visit.


But there he was, large as life, and twice as handsome in the doorway. Decked out in uniform. Royal Military Police, he said. Took me a while to stop seeing the eight-year-old boy in the man in front of me. Stumbled over my guilt and embarrassment for not being the father he’d deserved.


He wanted his photo taken, he said. Surely there were army snappers who could do that? Yes, but he wanted me to do it. He’d never asked anything from me all these years. What’s the point of having a photographer father if you can’t get your picture taken?


I tried to put him off, I really did. But he wouldn’t hear of it. Got to admit, he did look splendid against the sky blue backdrop, with his metal buckle and buttons gleaming in the glare of the lights. Got some grand shots of him. Twice the man I’ve ever been.


He told me he was off for a tour of duty in two days, so could I please send the photos straight to his mum by post? She wanted something for her mantelpiece while he was away. In Belfast.


That night, in the darkroom, he was there again, after all this time. I could feel him. A cold clamminess, waiting in the corner, slowly inching its way across the room. Waiting, hungry, greedy. I watched out of the corner of my eye as I developed the prints. Into the developing solution, then the fixer, then hung out to dry on the line.


The shadow shifted and darted to the workbench. I blocked its way. It would not have my boy.


....It’s cancer, they say.
Too far gone to do anything except “keep me comfortable”.


I’ve seen the pictures. Lifesize negatives of my skull and what’s in it. A big black shadow leaking across frame, eating me up, blotting out reason some of the time, soon to blot out my life.


The doctors have their theories. Their favourite is all those years of exposure to the fumes in my tiny darkroom. But I know. It wasn’t the chemicals. I’d denied him the sweet bloom of youth, so now he’s taking me. Slowly, painfully, stripping me of my dignity.


Wherever there is light, there’s shadow. I saw another one this morning, slipping along the wall in the corridor outside the Children’s Ward. Called out to the nurse, a sweet overworked girl with a soft Derry accent. “Ah, it’s just a trick of light” she said and rushed off in a flurry of efficiency and exhaustion.


It’s here. Come for me. Can you see it? Creeping around the walls. Getting closer.


My time is done. I see it now. Closer than ever. Standing right behind you. Can’t you feel its cold fingers on your shoulder?


I swear it’s grinning at me. Smiling for the camera.

This story was one of six featured in the Cast Iron Theatre's 'Dukeanory: Ugly Tales for Beautfiul Souls' on Thursday 19 October 2017, as part of the Brighton Horrorfest.
Posted by She Means Well... at 12:01